The Institute for Sustainable Communities works with government, nonprofit and private sectors throughout the world to make communities more sustainable and to find climate solutions.

Regardless of domestic issues and tensions with the United States, China will play a significant role if we hope to stay below the 1.5​° tipping point agreed upon in the historic Paris Agreement.

The country has made major commitments and promising strides in reducing emissions, but the economic slowdown and worsening trade war are risking a relapse.

We sat down with ISC’s Urban Director in China, Dr. Pan Tao to discuss ISC’s work to power through the potential the slowdown by:

Listen below or subscribe to the Sustainable Communities Podcast Network here! In this episode of What’s Possible, Jonathan speaks with MIT CoLab Executive Director Dayna Cunningham. They discuss how the CoLab works with communities to co-create solutions driven by community insight and innovation, and supported by MIT’s technical expertise.

This type of partnership reflects recognition of “hopeful contradictions” in the underserved communities they work with – tackling issues and challenges from a place of community strength and wealth and challenging the notion of starting from a place of assumed deficit.

This results in leadership from a framework of care and stewardship rather than exploitation and extraction.

An example of this Dayna and Jonathan discuss is the Green New Deal, which aims to tie climate, justice, and prosperity together. This approach envisions climate stewardship as a driver of prosperity, and recognizes the need to center frontline and vulnerable communities in the new paradigm.

What's Possible With Jonathan Lash is an exploration of the work that people are doing all over the world to tackle climate change that Lash and ISC will release every other month, it is produced in partnership with ISC. As the world rapidly urbanizes, answering the question, "what makes a successful city" is essential to making livable, equitable, and healthy places which do not harm the environment.

Jonathan F. P. Rose has spent much of his life seeking to answer that very question. He shared insights gleaned from research, travel, and his own experience building green affordable and mixed income housing in the 2017 work The Well-Tempered City.

In this episode of What's Possible, Rose shares:

What's Possible With Jonathan Lash is an exploration of the work that people are doing all over the world to tackle climate change that Lash and ISC will release every other month, it is produced in partnership with ISC. In this lively episode of What's Possible, ISC's Board Chair Jonathan Lash sits down with former EPA Administrator and Director of Harvard's Center for Climate, Health, and the Global Environment (C-CHANGE).

What's Possible: With Jonathan Lash is an exploration of the work that people are doing all over the world to tackle climate change that Lash and ISC will release every other month, it is produced in partnership with ISC. ISC's Board Chair and former World Resources Institute President Jonathan Lash sat down to interview her for the first episode of his new podcast What's Possible (produced in partnership with ISC).

What's Possible is an exploration of the work that people are doing all over the world to tackle climate change that Lash and ISC will release every other month.

Throughout her career, Georgieva has focused on designing and financing sustainability, resilience, and humanitarian efforts throughout the world. She also served on the ISC board of directors from 2001 to 2005. In this episode of What's Possible, she shared some locally-led promising projects and initiatives being funded by the World Bank, with the goal of mitigating emissions and adapting to a changing climate. In early 2016, ISC began a multi-stakeholder process to develop a report on community resilience in the Maricopa County region of Arizona.

The report, supported by and developed in conjunction with The Virginia G. Piper Charitable Trust, was the foundational document that prompted the two organizations to create the Advancing Community Resilience Partnership, which aims to inspire, align and accelerate a shared vision for the people of Maricopa County to further build a strong community shaped and shared by all.

In this episode we speak to two key staff to the partnership, Emily Mead and Karina French about what they've learned during implementation. 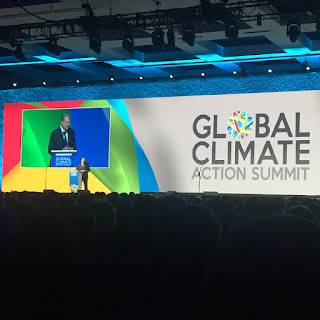 The Summit was an invite-only event where governments, businesses, activists, and nonprofits could gather, recommit to the COP21 agreement, and find new approaches to reach its commitments – particularly after the U.S. national government has announced it would back out of the agreement.

We sat down with Steve and Brent to learn more about the Summit. What happened, and what was meaningful there. You can also read George Hamilton's blog about the summit here: https://sustain.org/climate-tour/

COP21 Panel at the Capitol

The international climate agreement in Paris celebrated the progress states, cities, and the private sector have made in advancing climate solutions. This panel will explore the opportunities and challenges facing cities and the private sector in addressing climate change. How does the international agreement help or hurt progress toward a climate solution? What can cities and the private sector do without federal action? What federal policies will be most helpful? What policy principles are transferable to China, India and other countries?
Panelists:
Moderator: Greg Nickels, former Mayor of Seattle, Washington, and ISC Board Member